Are you using your testing environment to its full potential?

This environment lets you manipulate settings on loans, track differences, study, learn, or create “what if” situations. It’s also an excellent place to train new employees and dive deep into understanding all that is entailed in loan management software.

What is loan management software?

Loan management software is the application used to track what happens to a loan after it has been opened and funded. It’s the accounting of amortizations, fees, late charges, payments, and even payoff.

If the loan becomes too delinquent, loan management software allows for recategorizing of the loan, such as charge off or bankruptcy.

Our loan management application is called CIM GOLD®. It is an amazing tool and takes about 20,000 pages to document everything about it.

So do you think users can just learn it on the fly? No, it takes practice and doing to learn CIM GOLD. And there’s always something new to learn.

That’s why we provide a testing environment, or what is known in the industry as a Beta environment.

Perhaps you’ve seen some nerds developers wearing a shirt with this saying: 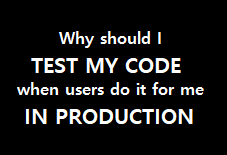 It’s meant to be a joke, because a production environment is a terrible place to test coding changes.

This Beta environment is the perfect place for your institution to try things out. For example, we are constantly converting new institutions onto our system. When they move onto our system, they usually have requests to adjust our system to match the way they do business.

We advertise all major changes to our system using the Release Update document. We send that document out before each Beta and Production release. (You can also read the document in DocsOnWeb under Updates.)

If the document advertises that we’ve created a new late charge code for an institution converting onto our system, and that institution does business in the same state you do business, perhaps you should set up a few accounts with that same late charge code in the Beta environment and see what happens.

You could track the differences in late charges using different codes over the next few months. The Late Charge Activity Report (FPSRP079) will show what accounts were assessed late charges and the amount of late charges.

Then if you like the way that late charge code works (and you’ve cleared it with your lawyers, of course), you can send in a work order to your GOLDPoint Systems account manager and have them run an init to change all late charge codes for loans in that state. Or better yet, you can start using that late code when new accounts are opened in that state. (Because, you know, document disclosures should be updated and all that.)

All these things can be accomplished in your test environment.

And that’s just one small corner of testing. You could also:

Then look at the Loans > History screen to see how the General Ledger accounts were affected.

The testing environment is your adult sandbox. Slather on some sunscreen and get digging.