Credit Reporting in the Age of COVID-19

After three months trying to wrap our proverbial arms around this COVID-19 pandemic (at a safe distance, of course), most institutions understand by now the guidelines established by the Consumer Data Industry Association for reporting loans in deferment due to loss of job or health caused by the pandemic.

The CDIA encourages the use of two Special Comment Codes:

The leading credit score companies, such as Vantage and FICO, consider these codes as neutral and should have no negative impact to a consumer’s score, assuming the account was current on payments going into the deferment period.

GOLDPoint Systems runs the Credit Reporting process each monthend and sends that information to Credit Bureaus via a transmission. Certain activity on the account will cause the Special Comment Codes field to automatically update accordingly.

You can manually assign Special Comment Code “AW” (affected by declared or natural disaster) or “CP” (account in forebearance) to any account with a deferment on the Credit Reporting screen. Or the system can assign it automatically during monthend Credit Reporting, but only if the following qualification is met:

If you run a Hardship Deferment from either the Loans > Transactions > EZPay screen or from tran code 2600-20 in CIM GOLDTeller, the system will apply Special Comment Code “CP” to the account at monthend. If your institution currently doesn’t allow the Hardship transaction in EZPay and would like to start using it, contact your GOLDPoint Systems account manager to have them set up those options for you.

If you are using Special Comment Code AW, we suggest you also have institution options K402 and K403 set, as described below:

For example, let’s say an account made a payment at the beginning of the month through wage garnishment (using the Garnishment transaction). That account would qualify for Special Comment Code “AM” (account payments assured by wage garnishment). But let’s say later in the month, a Deferment transaction was made to advance the Due Date, and the deferment included Deferment Reason Code 6. The account would also qualify for Special Comment Code “AW.” During monthend Credit Reporting, the system looks at the Special Comment Priorities screen, and if AW is higher in the grid than AM, the account will be reported with that instead of AM. 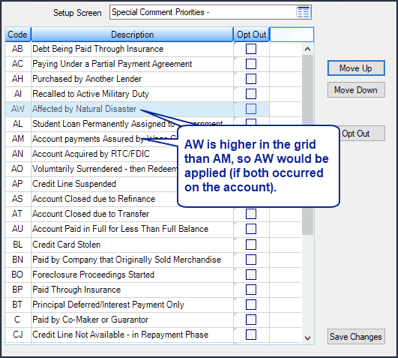 Many institutions use a program called e-Oscar to modify or change credit information reported to Credit Bureaus once that transmission has been sent (and should you find discrepancies). According to e-Oscar’s website, they are a

Hope this information helps when reviewing your deferment policies.