A little option that makes a big impact on loans

For those unfamiliar with programming terminology, a bit is an indicator that can be on or off. It’s the 0 or 1 that comprises the first building blocks of code language.

Probably one of the most important bits in GOLDPoint systems is the non-performing bit. This bit is set in the afterhours when a loan payment is X number of days late.

For example, if the loan payment is 92 days late from the Due Date of when it was supposed to be paid, the account is flagged as “non-performing” in the afterhours. Big whoop. Non-performing….that means nothing to you, right?

Well, a non-performing loan is a big concern. It indicates the loan is severely delinquent. If the loan could talk, it would say this: “Help me! I’m in trouble!”

Non-performing loans can be dealt with in several ways.

Setup and Effects of Non-performing Status

Each institution designates how late payments can be before the non-performing status is automatically applied to accounts. Using institution option NPDY (Number of Days Delinquent to Set Non-Performing), your GOLDPoint Systems account manager enters the number of days past the Due Date when a payment hasn’t been made and the system flags the account as non-performing.

If that option is not set, the non-performing status is still applied if the loan is 93 or more days delinquent. This change takes place only at monthend. Each month, for all loans that exceed being delinquent by 93 days, the system will flag the account as non-performing.

When that occurs, the system applies a red highlighted “NONPER” at the top of the screen for that account, as shown below: 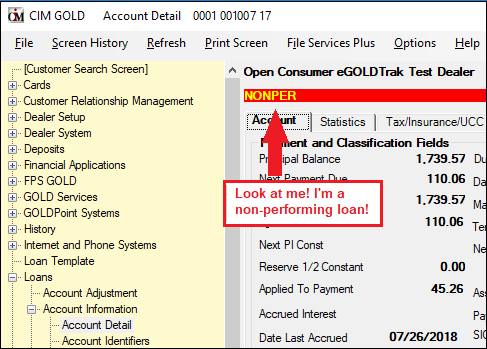 Non-performing accounts are usually designated in reports, such as the Accrued Interest Report (FPSRP019).

When a loan payment is made that brings the account to less than what is in option NPDY or 93 days, the non-performing status is instantly removed. Depending on the amortization method, all amortizations are caught up as well.

As mentioned previously, you may want to assign non-performing loans to your best collectors. How do you know who does the best at collecting on loans? Try using the Employee Performance screen to view statistics on employees’ collection efforts.

Remember: Collection queues can be set up however you want; nevertheless, it helps to view how others set up queues to give you ideas on how to set up your queues.

The following are two examples of how we used the LNNONP bit to set up queues on the Definitions tab of the Queue Administration screen (under Queues > Collection Queues):

The following queue will pull all loans where the Due Date is greater than or equal to April 1, 2019, and the loan has been flagged as non-performing.

Important Note: Notice in the example below that LNNONP is set to “4.” You would assume it should be “1” for “yes” and “0” for “no.” SQL, which is what the Collection Queues are based on, is different. “0” means “no” but “yes” could be a divisible number such as 4, 32, 68, 124. A good tip is to run a report in GOLDMiner using LNNONP as one of the fields and see what is reported in the finished report for the LNNONP column. The number that is not 0 is the number used to indicate “yes.” 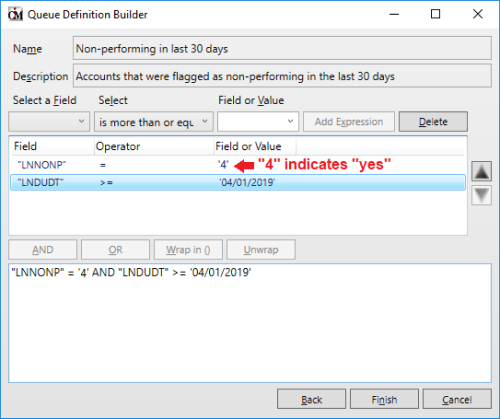 The following queue was set up to find all non-performing accounts that are between 90 and 120 days late of the run date (today’s date). 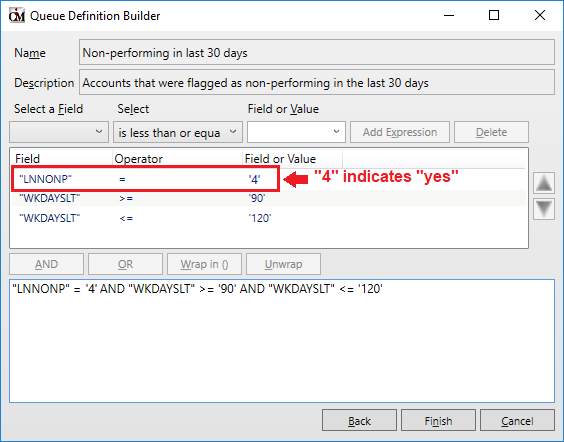 Then you would assign your best employees to that queue using the Assignments tab on the Queues Administration screen, as shown below: 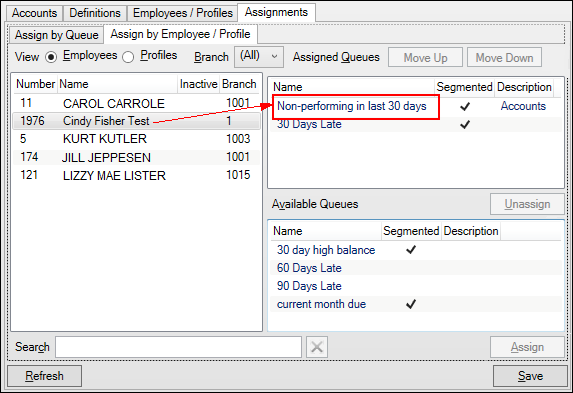 Build the queue, and the collectors can then start working the accounts using the Collection Queues screen.

Tags: Getting to Know, non-performing loan